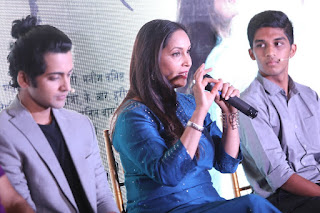 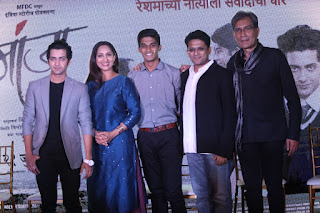 Nittin Keni, the visionary maverick of Marathi cinema, who has a keen sense of cinema for the masses and the classes, today presented Manjha, the psychological thriller directed by Jatin Wagle.
The much awaited Ashvini Bhave starrer ‘Manjha’s release date has been announced leading to much excitement among the Marathi cine goers who have been teased by the enigmatic posters, which was followed by a cracker of a teaser and then to top it all, a superlative trailer that got everyone guessing to unravel the plot of the film.
The film appears to be a psychological thriller between a psychotic teenager, (played by ‘Dance India Dance’ fame Sumedh Mudgalkar) and an introverted boy, (played by Rohit Phalke of ‘Balak Palak’ fame), undergoing psychological therapy. There seems to be a cat and mouse afoot because it is not clear which of the boys are saying the truth about a heinous crime being planned. Behind the introverted boy, as his pillar of strength against his psycho friend, is his strong mother played by Ashvini Bhave who seems to have a complex role of not only single handedly bringing up a disturbed and introverted son but also coping with her own seeming vulnerabilities as a single mother. Rising above these challenges, she is seen as defending her son against the whole world – her love for her son being the strong basis for her conviction of his truthfulness. It appears however that at the heart of the film, is an insight on parenting and the importance of communication between parents and teenage children, requiring a fine balance between giving children the space to develop their own wings, and yet at the same time giving them a stable grounding of an emotional bonding based on open communication and a healthy interest in their lives.
The Jatin Wagle directed film promises to be quite a treat not just with its intriguing theme but also its excellent technical brilliance – be it the cinematography, the sound design or the background score which is unlike anything seen on the Marathi screen for a while.  It is therefore no surprise that beyond the fans, audiences and critics, the M-Town celebrities are eagerly awaiting to see the film, if their thrilled responses are any measure.


An India Stories Production, ‘Manjha’ is the first Marathi film Produced by Producers Trilok Malhotra and KR Harish. The film is presented by MFDC, a venture helmed by Nittin Keni and Manish Vasisht, and is slated for a global release on 21st July, 2017.