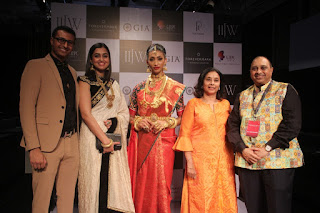 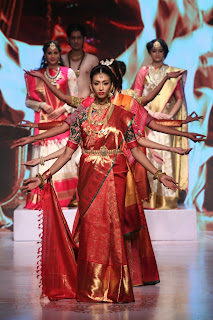 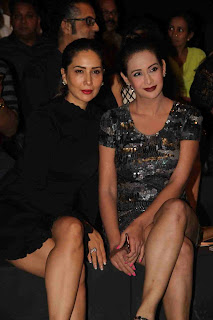 Mumbai, 25th September, 2017: C Krishnaih Chetty Group of Jewellers closed the final day at the glamorous India International Jewellery Week 2017 powered by GIA with a grand collection accompanied by music, dance, mime, commentary, glitz and drama.  The Gem and Jewellery Export Promotion Council (GJEPC), apex body of the gems & jewellery sector, presented the 7th edition of the India International Jewellery Week (popularly known as IIJW) powered by GIA (Gemmological Institute of America); co-partnered by Forevermark and Platinum Guild International on 23rd and 24th September 2017 at St. Regis, Mumbai. IIJW 2017 is a BY INVITATION exclusive annual event to showcase or launch enticing jewellery collections. Bright Outdoor Advertising is the Outdoor Partner.
What a magnificent end it was at the India International Jewellery Week 2017, when C Krishnaih Chetty Group of Jewellers unveiled their stunning ‘Sprezzatura’ Collection as the finale for their Navrasa Show featuring the 9 emotions of fashion. At the end of the spectacular show Shreyas V. Cotha, Executive Director, C Krishnaih Chetty Group of Jewellers and Bhavna Cotha walked down the ramp to thunderous applause for the sensational show.

One of the most respected and honoured names in the jewellery business, C Krishnaih Chetty Group was founded in 1869 and is known as one of the world’s finest heritage businesses.
Appointed jewellers to the Royal House of Mysore, C Krishnaih Chetty created hundreds of pieces of the Double Headed Eagle known as Ghanda–Bherunda which was presented to the important contributors every six months by the Kingdom of Mysore. That symbol is now the official seal of the Karnataka State. With 6 superb showrooms in Bangalore, C Krishnaih Chetty is all set to move into the 21st century with stunning designs for jewellery admirers in India and around the globe.

The Ballroom of St Regis was converted into a wedding pandal with 10 ornate pillars on the stage. White cubes lined the ramp along with rows of flowers that streamed down from the ceiling to form a perfect backdrop for the show.
The Navrasa show – featuring the 9 emotions of fashion was a grand glorious display that held the audience in awe and enthralled them with the gorgeous jewels on the ramp.
The opening dancers performed a modern version of the Bharat Natyam to the beautiful concept and script by The Bioscope Diary. The story of birth, love and marriage unfolded as the models draped in splendid brocade saris by designer Gaurang glided down the ramp and posed gracefully.
Sprezzatura is the perfect word that described the C Krishnaih Chetty Group of Jewellers’ collection that blended seamlessly the unconventional with design concepts. The Heritage Collection was a great revival of the most amazing creations using handmade and modern 3D printing technology.
The brilliant Valanda diamonds nestled creatively with the Cabochon Rubies and twinkling emeralds as the jewellery, which drew from the ancient craft and antique designs dazzled on the ramp. The fabulous specialised traditional closed and open back setting styles of South India and the Deccan were very evident in the intricately crafted pieces. There was a grand medley of colour and immaculate finishes along with rare coloured stones and diamonds that formed the Sprezzatura range of jewellery.
The wedding on the ramp with the bride’s and groom’s entourage was the focal point of the show that unveiled the splendorous jewellery for the wedding. Temple Raani Haars, diamond chokers, matching cummerbunds, pearl bangles and long gem chains were magnificent. The Thaali or Thirumangalyam presented by the groom to the bride was a work of eternal beauty.
Large pearl tasselled earrings, Maang Tikkas, Maatha Paatis, and the very fabulous plait ornament or jadanagam was created in the most intricate designs. Jewels for the bride were opulent to the extreme as Haath Phool, bangles, tikkas, Raani Haars, Jhumkhas, waistband and uncut diamond necklaces along with superbly crafted gold pieces looked ethereal.
Mr. Praveenshankar Pandya, Chairman, GJEPC, said, “In sync with the Prime Minister’s vision of showcasing the best of Indian creativity and craftsmanship to global customers, IIJW is an initiative to showcase the finest in indigenous Make In India jewellery. Be it design or innovation, or top-of-the-line craftsmanship, technology and quality, Indian jewellers are comparable to the best in the world. The most renowned of Indian jewellers will showcase their inspired and admired classic and contemporary jewellery collections to the crème-de-la-crème of Indian society comprising socialites, celebrities, aesthetes, policy makers, trade constituents and influentials amongst others. IIJW is an extravaganza, a celebration and a bonanza for jewellery lovers who can get a sneak preview of the most extraordinary, exquisite and extravagant collections for this festive season.”
The leading retail houses and top designers showcasing their collections at IIJW 2017 powered by GIA (include Nakshatra World, Caratlane, Azva, PC Jewellers on 23rd September; IIGJ Mumbai in association with Izaara by Waman Hari Pethe Jewellers; Surya Golds in association with Swarovski Gemstones; Pallavi Foley presented by Bluestones.com; Mehta & Sons by Narendra Mehta in association with IGI; Laksh Pahuja presented by Gemma & HRD Antwerp, Anmol using Australian Diamonds; Reliance Jewels using Australian Diamonds; C. Krishnaih Chetty Group of Jewellers on 24th September 2017.
Posted by http://www.starfriday2012.com/ at Tuesday, September 26, 2017