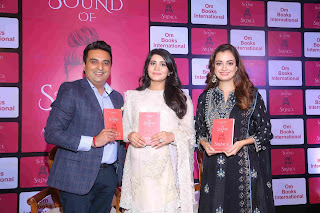 Om Books International celebrated the launch of The Sound of Silence by Akanksha G Mittal on 05th September 2018. The tome was launched by Actor and UN Environment’s Goodwill Ambassador for India Dia Mirza


On the occasion author Akanksha G Mittal shared her experience of putting together the book, with Dia and the gathering.

About the Book
The Sound of Silence, Akanksha G Mittal’s debut collection of poems, is a poignant exploration of themes including love, longing, loss, melancholy, liberation and euphoria. Thoughtfully crafted, each poem weaves a cautionary tale for the wandering heart, while it upholds a fragile, yet tenacious belief in life and light. With its evocative imagery, The Sound of Silence, presents an ever-shifting kaleidoscope of emotions in the course of a sinuous journey called Life


About the Author
Akanksha G Mittal spent her growing-up years at Ashok Hall in Majkhali, Uttarakhand amidst the magnificent Kumaon hills. Ever since, she has nurtured a deep love for nature and poetry. A district-level champion in badminton doubles from Almora, she is equally drawn to theatre, fine arts, photography and horse-riding. Akanksha, a Bachelor’s in Entrepreneurship from Jesus and Mary College, Delhi, divides her time between writing poetry, reading, heeding the call of the hills, and looking after the Punjab chapter of the Corporate Social Responsibility of a leading conglomerate in India


Shakun Batra, Award Winning Film Director: Such complex emotions in such simple words that it takes a moment before the depth of Akanksha’s thoughts become apparent.

Ajay Mago, Publisher, Om Books International: The Sound of Silence earns its stripes on all fronts—through its poems, its illustrations, its whispered words, its stifled pleas, it sighs and its deep silences. It is an act of courage that merits applause, an offering to be received with grace, and an exploration of those silences in our lives that help us decipher the power of words, of Nature, of Life itself.

OBI has an equally strong and varied children's publishing programme under its imprint, OmKidz.